Ah, the silence of a sleeping child. I think it's time to go have a drink! 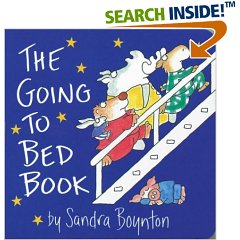 All is quiet in our household. Oronzo and I have just finished with the flurry of cooking dinner, with a toddler underfoot, eating said dinner, bathing said toddler, and letting him run willy nilly naked in his crib, punchy tired but laughing hysterically. Eventually I managed to get a diaper and pjs on Snuggle Bug and I proceeded to read him not one, but two bedtime stories. The first was The Tortoise and the Jackrabbit and the second was The Going to Bed Book. Sandra Boynton rules!

After bedtime stories, we went into the master bathroom (that sounds much more elegant than it is) and brushed our teeth. Then it was time for Snuggle Bug to say "goodnight" to his Daddy and his 3 kitties. He waves and blows kisses. It's very cute!

Having finished his bedtime ritual, I took him back into his nursery, turned on his lullaby cd, and laid him down in his crib. Of course, his Fisher Price aquarium had be turned on as well. He settled down quickly and is now fast asleep.

Now, it's time for Mama to go out with 3 lady friends to a Polynesian dive bar and have an enormous drink called a Scorpion! It's the size of a kid-sized fish bowl! It's been far too long since I've been out for a drink with the girls. Oronozo is staying home with Snuggle Bug and getting some work done. That's okay, I'll drink some for him too!

Deanna, I'll be thinking of you as baby Jake is due to arrive today!
7:22 PM
5 comments

Thanks for visiting. I hope you'll be back.

rapsoda- Greetings from the U.S. Thanks for stopping by.

blackbeltmama- the night out for drinks was heavenly! And I will be back to your blog for future visits. :) Thanks for stopping by mine.

I know this is an older post, but just wanted to comment we read a lot of Sandra Boynton in this house too! We have the one you posted above; and I think my favorite is Barnyard Dance :)

Michelle- my favorite is actually "Not the Hippopotamus." For some reason, this one makes me laugh!