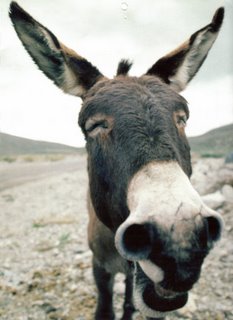 I've read a lot of threads on various adoption forums about prospective and adoptive parents being subjected to ignorant, rude, and intrusive comments about their family being formed through adoption. I've considered myself lucky in that most comments sent our way have been positive and encouraging, until this week!

I work on a military base. I'm not in the military, I'm just a government contractor. Every morning, I have to check in at the base gate and have a guard with a big gun verify my base ID and let me in. I've gotten to know the guard supervisor a bit and we've conversed on occasion.

Earlier this week, he saw me walking to a building on base and he stopped to say, "Hi." Our conversations in the past had been pleasant enough, so I allowed myself to be detained. What a mistake and a complete waste of my time!

Here's how my conversation went with this man, the one that I once thought was a pretty decent guy:

Military guy: "I saw you and your husband on the news a while back talking about adoption. I didn't realize you adopted your little boy." ((We were asked by the agency we used for our licensing to be one of three couples interviewed for an adoption segment on a local news station and we gladly obliged. Snuggle Bug was shown during this interview.))

Military guy: "So, if you don't mind me asking, how much did you pay for him?"

Me: ((annoyed but not particularly surprised at this common misconception) ) "We didn't pay for our son, we paid for the services that were necessary to adopt him."

Military guy: "Yeah, whatever. So, how much did it cost?"

Me: "That's information we choose to keep private."

Military guy: ((astonished look on his face)) "Well, at least you adopted a white American baby. I don't understand people that go and adopt those Chinese babies. I would never do that! At least you got yourself an American baby." ((giving me a look of approval))

Me: ((shocked, angry, and hostile expression on my face)) "The race of our child was irrelevant to us! We chose to adopt domestically simply because we wanted to adopt a newborn and that's not possible if a couple adopts internationally. Otherwise, we'd have no problem adopting from China!"

I abruptly ended the conversation by tersely informing this prejudiced excuse of a man that I had to go, before I gave in to my urge to berate him for the ignorant jackass that he is and end up face down on the concrete with his gun pointed at my head!

I have never been so offended in my life! As I stormed away, I called Oronzo on my cell phone and subjected him to the brunt of my rage and indignation! After I relayed the conversation, Oronzo laughed. I asked why he was laughing and he told me that I could either laugh at his stupidity or get angry, but I wasn't going to be successful in "educating" him.

So, it's finally happened to me as well. I'm thankful that Snuggle Bug isn't old enough yet to understand these types of insensitive and hurtful comments, but I supposed I need to eventually prepare him for what's to come. How does one prepare a child for such ugliness in the world?

Have any of you been subjected to ignorant, rude, and intrusive comments in regards to adoption? How did you deal with these painful conversations?
8:31 AM
8 comments

(oops -- I posted this on your previous entry by mistake;-)

Boy, have we ever -- and our dd is only 19 months old! The first "baby buying" comment we got was from our sister-in-law, not a source we expected to hear THAT from. When we told her, somewhat aghast, that dd was not a commodity bought and paid for, she continued to argue her pointless point that since money had changed hands (lawyer, agency, prospective birth mother living expenses)indeed she was. Grrrrrr. Knowing her as we do (likes to argue for the sake of arguing), we quickly changed the subject. Not going to change that opinion anytime soon, either -- good thing we don't see her often!

And then there are the many tiresome variations on the "real mother" theme: does she ever see her "real" mother (yes, every day -- what?! oh, you mean YOU); aren't you worried that she knows your names and where you live (why?!); aren't you worried that she'll snatch "her" child back (oh, that's why); what do you know about her "real" mother (none of your freakin' business!!!) Blah, blah, blah....Some questions come from well-intentioned but ill-informed sources, so we often have the opportunity to gently educate while respecting dd's, as well as her bmom's privacy. But some of the questioners are just opiniated and even hostile, with no desire or intention to learn anything other than what they already *know*.

Oronzo has it right....sometimes all you can do is laugh at the jackasses out there.....better than bashing heads against walls (your own or somebody elses;-)

Well, you've obviously had more experienc with the ignorant comments than I have. I'm sorry. I suppose it especially sucks when it comes from your own family members!

Right after LittleBit came home, we were talking with some neighbors and mentioned we were a few days away from having our SECOND child whom we were adopting through the foster care system.

She put her hand on LittleBit and said, "But SHE'S yours, RIGHT?!" I looked at her and said, "Nah. We bought this one on Ebay." and I walked away.

You can't educate stupid, you can only laugh it off.

I made it here!

The question I get asked even by family time and time again is, Why or How could she give up her baby? First it's none of their business. Secondly it's not "giving up" in my opinion, it is placing for adoption. There is a difference.

Pajama Mama & Deanna- thanks for stopping by and commenting.

Pajama Mama- I love your witty come-back to such a stupid question! I'll have to remember that one.

Away2Me- You know, I guess, now that you mention it, I've had the "How could she give her baby away?" question posed to me by family and acquaintances. I'm with you. I don't like the use of that terminology! It's insulting to birth mothers and the reasons are no one else's business!

I'm so happy that you found me and now I found you! (Does that make any sense whatsoever?) Now we can commiserate on the giant jackasses of the world-- nice photo, btw. I truly cannot believe that that man said that. We too chose domestic adoption because we decided that we wanted a newborn, but I can't believe the assumptions that people make about us and that decision. If nothing else, it always reminds me to ASK people about their motivations if I'm curious (and if it's any of my business) rather than simply assuming that I know what that are. Because you know what happens when you ASSUME....(see picture. reference dumb saying about making an ass out of U and ME.)

Hi pithydithy! I've been lurking on your blog for some time now, since you had the post about your interview. I watched it! That was just a few months after we had our interview.

I'm watching to see how your adoption journey goes. Feel free to follow along as I recount our first adoption experience and hopefully more about a second one, if we're so blessed!

I just can't imagine someone being so insensitive...but then I guess nothing people do should surprise me anymore. Art imitates life and we've seen this sort of comment on tv...so it had to originate somewhere!