To squeak or not to squeak, that is the question!
! 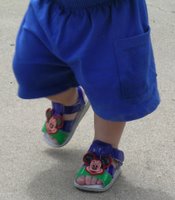 Snuggle Bug's favorite pair of shoes are his Mickey Mouse sandals. It's not Mickey Mouse that makes them so alluring, he could care less about that. What he loves is the fact that they squeak when he walks!

These sandals were a gift. The first time I put them on him and then stood him up on his feet, they squeaked and he was amazed. He stomped one foot and they squeaked again! Then, he did a little happy dance and got so excited with all the squeaking he produced! He spent the rest of the day contently toddling around the house, squeaking as he went. At least we knew where to find him, right? Thankfully by the time these sandals become too annoying, he'll have outgrown them. Right now, they're just darned cute! The joy that he gets from wearing them is adorable.

Snuggle Bug has another pair of sandals that I think are pretty darned cute as well, and they matched one of new his outfits so, to get him ready for church yesterday morning, I dressed him in the outfit and put on his froggy sandals. He didn't seem to mind my choice, until I stood him up. As he walked away, his expression became puzzled. He stopped, lifted one foot, and stomped it once and then again. The second time he stomped in frustration. He turned and gave me accusing look. I knew what he was thinking, 'Where's the squeak?!'

I told him, "Sorry baby, those sandals don't squeak but they match your outfit better." I couldn't very well take him to church in squeaky sandals! The priest would have a conniption, can you imagine?! Snuggle Bug threw me a disdainful look and left the room without looking back.

After mass and brunch, we came home and he wanted to play outside. I took pity on him and took the froggy sandals off and put his squeaky ones on. To assuage my guilt for making him wear the non-squeaky shoes in the first place, despite his obvious disappointment, I even let him play with the garden hose and get all wet. He was quite pleased! Toddlers are so much fun!
12:54 PM
2 comments

I have read your entire blog tonight....what a beautiful story!! And you tell it so well! What a beautiful little boy he is!! God bless all 3 of you.

You really do tell your story so wonderfully! and I'm not kidding when I say how much hope it gives me. Thank you.