This and That
Good morning, Blogland!

Not much going on at this end. I tried to do a whole lot of nothing over the weekend, in an attempt to get over this nasty cold I have. I'm still not totally over it, but at least I got to nap when Snuggle Bug napped.

Oronzo and I are watching the new Battle Star Galactica series and it's wonderful! We've made it about 1/2 way through season two. I think this is one of the best Sci Fi series I've watched.

Saturday we got a visit from Aleiza, Oronzo's mom. She came bearing gifts. One in particular was quite large. She brought Snuggle Bug a Little Tykes kitchen set and he loves it! Saturday night he "cooked" dinner while I did. Yesterday morning he insisted that his breakfast plate be put on his kitchen counter and he stood there and ate. Who would've thought he'd love a play kitchen set so much? Maybe he's going to grow up and be a famous chef and cook for his mama a lot! :) 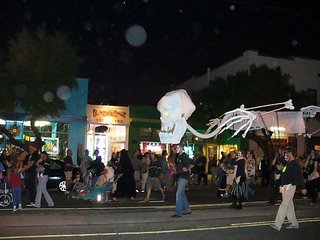 Yesterday, we got together with an old friend that's in from Boston on business. We went out for ice cream, then dinner (yes, we had dessert first) and then we walked a few blocks to watch a big All Souls Procession (dia de los muertos). I've never been to one of these before but the music, the costumes, the larger than life skeletons and puppets, the totems, and the masks were absolutely amazing! Snuggle Bug did pretty well with it all. He wanted Daddy to hold him close and he kept saying "ghosts" but he didn't appear to be overly frightened by it all.

Well, that's all for now. What did you do this past weekend?

That parade is unbelievable! My kids have a Little Tikes kitchen and it has been played with nonstop for five years, so look forward to many years of happy cooking.

Hi! What a cool concept - the all souls procession!

We had an interesting weekend because my husband was away for a retreat all weekend. We all missed him very much and had a lovely homecoming dinner for him last night.

Don't forget about Holiday Traditions today at Diary of a Stay at Home Mom's place!!

I'm with you with Battlestar Galactica.

Colds, huh? When Snuggle Bug is taking a nap, and nobody is watching, do the jig.

It won't cure your cold. But at least you'll remember how funny you look trying (in vain, I might add) to get rid of your cold.

Hope you're feeling much better this week!

I bet Snuggle Bug looks so cute w/his kitchen set! Kayla got one for her birthday and loves it! She's always pulling me into her room saying "cook!"

I went to Baltimore all weekend to become Godmother to my niece. It was sooo nice to hold and play with a baby, mine are "soon to be teenagers" =)

I am sorry to hear about your cold, hope you feel better soon.

The parade does look like it was amazing. We took Isabella to ride a horse - you'll have to stop by my blog and see the pictures. Plus my in laws are in so we are having a great time visiting and the girls are enjoying seeing this set of grandparents (since the live so far away).

My kids had a little tykes kitchen and they loved it (they are 23 and 25 now). I will never forget the delicious meals that came from that kitchen! What a blessing...

It would be awfully nice to have aa real chef in the family so who knows? And the parade looks amazing although I can see why Snuggle Bug wanted Daddy to hold him tight. What a nice weekend you had.

We celebrated our almost son-in-law's birthday with a prime rib dinner hosted by his mom.

Sorry about your cold. Hope it goes away soon.

I would love to see that procession.

I never really got in to the new "Battle Star" Gallactica. I LOVED the old series though. "Appolo" was my very first crush! And I SO wanted to have the same bear that boy had.

Snuggle Bug must has looked so cute cooking! We bought Munchkin one for her birthday. I have to stop myself from not giving it to her earlier!

Had some big talks this weekend myself (see my blog) and am a very happy Bunny now!

I've only seen one of these processions and you are right, they are amazing. That is quite the picture you have posted. Snuggle Bug did really well.

Isn't is amazing how safe children feel in their parents arms? Awesome!

Jim and I love BSG. I've been taping this season as we haven't been home to watch. We're going to have a marathon day soon to catch up.

My hubby and I are huge Battlestar fans! We watched the miniseries that resurfaced the old show, and haven't missed an episode since. If you like that kind of stuff, it's a really great show. Glad you're enjoying it :)

Have a wonderful day!

The All Souls Procession sounds great! I've never attended one (we don't have them here) but a Mexican contingent joined our Halloween Parade, some of them wearing skull masks and carrying banners for Dia De Los Muertos.