It wasn't supposed to work this way! (Part 7) 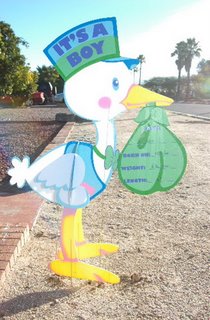 I left off in Part 6 with us having brought Snuggle Bug home and anxiously waiting for Giselle to sign termination paperwork that following Monday.

Our original intent was to stay holed up at home. Since we didn't know if we would be allowed to keep Snuggle Bug, we wanted to save our family and friends the pain of getting to know him only to have him returned.

Somehow, our attitude changed. Despite the uncertainty of it all, we were so excited to have this precious child in our midst and we wanted to share our excitement and joy. We decided to attend a Christmas Eve party that some friends of ours were given and we took Snuggle Bug along.

I'm sure some of you may be appalled that we would take a 3 day old baby out to a party, but it wasn't some wild party, it was a gathering of close friends, many of whom had offered great support to us throughout our adoption process. And Oronzo and I have never been of the opinion that newborns are extremely fragile and should be isolated.

So, we went to the party for a couple of hours. Then, the three of us went to Christmas Eve mass. It was important to me to attend mass with Snuggle Bug and Oronzo. Up until this point, Oronzo wasn't much into going to church and I had been going every Sunday alone. But I asked him if he'd go that night so that I could have my family with me. I told him that we had much to thank God for. He surprised me by agreeing to go.

Christmas Eve mass was beautiful and seemed even more of a spiritual experience to me than usual. I'm sure that was due to the fact that I had a tiny babe nestled in my arms and my husband standing beside us with his arm around my shoulders. I was filled to overflowing with love and peace. I said a special prayer for Giselle and Quinn, as I knew they must be in a lot of pain at this point.

Oronzo surprised me at the end of mass by telling me, "If you didn't go so darned early in the morning, I might attend mass with you once in a while." He was right, I preferred to attend mass at 7 a.m. each Sunday.

"Okay, how would 9 a.m. work for you?" I asked. Was God softening his heart through this child? Family members had assured me that once Oronzo became a father, he'd probably start going to church with us. I didn't believe them. Perhaps they were right after all!

"Better than 7 a.m.," was Oronzo's response. "And we'd have to go out for a family breakfast after mass."

The next day, was Snuggle Bug's first Christmas. He didn't seem all that impressed. He was more interested in sleeping and eating. Clara called at 9 a.m. to see how he was doing and we let her know that he was settling in nicely. After chatting with her a bit, I wished her a Merry Christmas and let her know that Giselle and Quinn were in our thoughts. I wondered if they would call. They didn't and I was too afraid to call them. 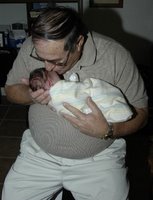 Later that morning, Oronzo's parents asked if they could come over and spend time with Snuggle Bug. They assured us that they were aware of the uncertainty of it all, but they wanted to see him anyway. How could we refuse?

Peyton and Aleiza came and held Snuggle Bug. They cooed at him, they rocked him, they examined his tiny toes and fingers. They fell instantly in love with him, as we had. They spent quite a bit of time with him and produced and insane amount of gifts for him (this was just the beginning of the grandparent spoiling). They asked after Giselle and Quinn and we told them what we knew.

Before they left, we found ourselves agreeing to stop over for the family Christmas gathering that afternoon. We hadn't intended to stay long, but when we arrived with Snuggle Bug, he was whisked out of our arms and passed around amongst all the relatives. I have one cute picture of Larissa holding Snuggle Bug, balancing him on her extended stomach. At the time, she was 5 months pregnant with Rebecca.

Snuggle Bug was absorbed in to Oronzo's family and showered with love. How could we deny him this, even if we weren't allowed to keep him? It was foolish of us to think that keeping him at home was the best thing for all involved. He deserved those initial days of love, no matter what happened.

That Sunday we stayed close to home, holding Snuggle Bug, caring for him, napping with him, loving him. By this time, Oronzo and I had already worked out a night feeding schedule, each of us taking shifts so that we both got at least a little sleep. It wasn't so bad. As the day of termination grew near, so did our fears. Would she sign or wouldn't she?

Monday morning, we were up at the crack of dawn, restless and anxious. Our lawyer had told us that Giselle was schedule to meet with her lawyer at 10 a.m. to sign the papers. He told us he'd call us after it was done.

10 a.m. came and went with no word from our lawyer. The nail biting began. I realized that I felt sick to my stomach. I was holding Snuggle Bug close to me the whole time, refusing to set him down. I stayed in my pajamas, refusing to leave the house. Family members started calling and we ignored their calls. There was only one person we wanted to hear from.

By noon, I couldn't take it any more and I called our lawyer. It shouldn't have taken 2 hours to sign paperwork, right?!

"Yes, this is OW. I'm calling to ask if you've heard from Giselle's lawyer. Has she signed the termination papers yet?"

"Well, I've heard from Giselle's lawyer. She didn't make her 10 a.m. appointment," our lawyer explained. My heart leapt into my throat at these words! My brain was sluggish in trying to process what this meant.

"Has she changed her mind?" I asked with a catch in my throat.

"It doesn't sound as though she has," my lawyer tried assured me. "She's got some post-pregnancy pain this morning and just didn't feel up to going in at 10 a.m. She told her lawyer that she'd try to get in later this afternoon or sometime tomorrow morning to sign the paperwork."

Our lawyer told me to hang in there and promised he'd call just as soon as he heard anything. I thought to myself, 'Yeah, right. You've left us hanging these past 2 hours without a call!'

I hung up with our lawyer and relayed our conversation to Oronzo. He had a worried expression on his face, but he remained calm. Somehow he always remained the calm, strong one.

By 2 p.m. Oronzo forced me to get dressed and leave the house. We went over to a friend's house so that Oronzo could help him and his wife with a bit of remodeling. I understood that Oronzo needed an outlet and that working with his hands was what worked best for him, so I reluctantly went with him. I hoped that hanging out with our friends would cheer me up and I knew they'd be thrilled to have some one-on-one time with Snuggle Bug.

Okay, more will be revealed soon.

To continue reading about our first adoption journey, see Part 8.

I've read the happily ever after...and this waiting still kills me... It's like watching a movie I love over and over again and still getting nervous about what will happen!

Thanks again for sharing this...

So thankful we know Snuggle Bug ended up in your home...or else all MY nails would be gone.

You realy relay the experience in a way that I can understand and feel a bit of what you were feeling.

Don't wait too long for the next installment. PLEASEEEEE!

ARG!! You are totally good at this!!! I am dying to know what happens next (I know the great part...but STILL!)

You could be a suspense author!!!

Wow! What a heart-wrending thing you and Oronzo went through; you have more strength than I. I'm so glad that Snuggle Bug ended up at home with you. I'm looking forward to the next installment.

I agree with all of your readers. Suspenseful even when we know the outcome!
(Thanks for adding me to your list - I wasn't sure I was that interesting, but there's always a little suspense, anyway!)

Hello! I just wanted to drop by and thank you for commenting such beautiful sentiment on my blog! There is so much more to say than can be said in the space of a comment box but in its most basic form I just want you to know that your desire to be a good mom is very evident in the fact that you are reading people like Manuela and myself.

We all have so much to learn from one another. Setting aside our own fears and trepidations is how we create positive change for our children. I appreciate it very much.

I would like to link to you if that's alright?

Have a beautiful evening.

I am sitting here hoping that what I type doesn't come across wrong,as I'm intending it in the most loving way possible: If anyone ever tells you that you had the joy of a newborn without the pain of delivery, they should be informed how incredibly wrong they are. This is more painful and just as beautiful as any of my birth stories are. I cannot imagine the agony of not knowing... Thank you so much for sharing your story with us!

You always seem to know when to leave off at the most suspenseful part of the story LOL You have a wonderful way with words and how to tell a story - your readers can feel every thought and emotion you went through...and as others said even though I know the ending I get tense thinking about "what happened next?" Looking forward to reading part 8!