2006 Halloween Pictures
Oh my gosh! Getting these 3 pictures uploaded to Blogger was quite painful this morning! So, show me some love and leave me a comment letting me know how cute you think my little Tigger is. :) 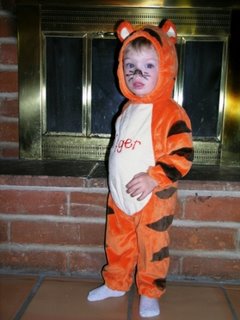 We got Snuggle Bug's Tigger costume from Babies R Us several months ago and hoped he wouldn't grow out of it before it was time to wear it. Luckily, he didn't. The costume fit him perfectly and this year he wasn't trying to take the hat part of his costume off. He actually liked his costume and walked around saying "Tigger" a lot. He did manage to smear his nose and whisker paint a bit. 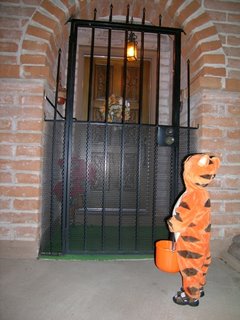 This is Snuggle Bug standing outside of our neighbor's house, waiting for them to respond to his doorbell ring. Frank and Betty are our favorite neighbors. Snuggle Bug loves to go to their house and play. They keep toys in a spare bedroom just for him. 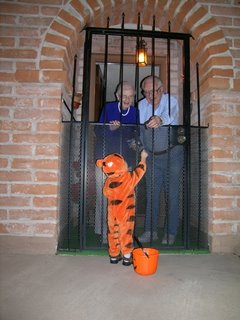 As you can see, Snuggle Bug grasped the concept of getting candy rather quickly. Around our neighborhood last night, he had no problems walking up, holding out his bucket, and saying "candy". Thankfully his good manners were present as well. He was great about saying "tank you" to everyone who gave him candy. Our neighbors thought he was adorable and he got extra candy from each of them. It wasn't long before his bucket got too heavy for him to carry by himself.

Snuggle Bug lasted about an hour last night (6:30-7:30). He and I went around with our next door neighbors, a 3 year old named Natasha and her parents. Oronzo stayed at home to take care of the trick-or-treaters that came to our house. As we went from house to house, Snuggle Bug willingly followed Natasha when she said, "Come on Tiggy!" After an hour we had hit almost all the houses up and down our street. Natasha turned a corner and headed for another street in our neighborhood but this time Snuggle Bug didn't follow. He walked the opposite direction and headed straight for home. He'd had enough and he wanted his milk and bed. He didn't even tell Natasha goodbye.

How adorable! He's the cutest Tigger ever. You gotta love a kid who knows what he wants. I love the part where he headed home.

he is the sweetest Tigger - T I double GR ER!

Snuggle Bug is the cutest little Tigger ever---very impressive that he pretty much left his face paint/hood alone (Maya had a little issue with her dino hood at times;-)!

Love the Tigger. The face paint tops everything.

Always wanted to “paint” my 3-year old’s face. But he won’t let me.

He associates face painting with make-up

aww he looks so adorable! Isn't Halloween fun with the little ones?!?!

Aww! He is the cutest little Tigger ever! =)

Soooo Cute! He is just adorable! Tara didn't take Alexys trick or treating but she was dressed up like Piglet although Grandma didn't think that was nice. She was all in pink - as usually although she got the most adorable Christmas dress, not pink or red but purple and off white. It is so pretty and cute and of course I will have photos up.

Your little "Tiggy" is just precious. What a gift!

I am commenting b/c I understand the pain of uploading pics to blogger!
but he really is adorable and Tigger also happens to be my fav Pooh character! so bonus for that too!

What a cutie! I love the whiskers!

how cute. Aren't grandma and grandpa neighbors the greatest!

that's the cutest Tigger I've ever seen!! Sounds like he had a great time!

Those pictures are SO adorable!! Our little guy didn't keep his "head" on very long!

That picture of Frank and Betty smiling down at your little Tigger just melted my heart. So cute! They would be my favorite neighbours too.

He's just as cute as he can be. What great photos you got. He'll enjoy looking at these someday. The little whiskers just make the whole costume.

That must have been so fun for both of you! He's the cutest Tigger I have ever seen!

He is very adorable. Great photos.

Too cute, just too adorably cute. I would have given him all my lollies.

May I introduce myself...my name is Joy,too

loved this post...sometimes I post a favorite blog of the week...yours could very well be next...

Sorry for falling off the radar for a bit!
Snuggle Bug has got to be THE cutest little Tigger ever! So sweet that he decided by himself that it was time to go home. I love it when they just indicate it themselves, rather than having to be persuaded that it's time!

Oh my, Snuggle Bug is the CUTEST little man I've ever seen. I love the Tigger costume and I'm so glad that he grasped the whole Trick-or-Treat concept. Thanks for sharing!!

As far as photos go, might I suggest either uploading photos in Mozilla/Firefox instead of Internet Explorer or switching to Blogger in Beta. I've had zero issues since doing this. Good luck! It really is a pain!!

Adorable!
I miss our little tiggers. They grew out of them two years ago, but I have pictures to remind me.
Good job on the whiskers. I couldn't even get mine to wear the hood!

No cuter tigger ever!

that is sooooooo cute!