Boo's adoption has been finalized! 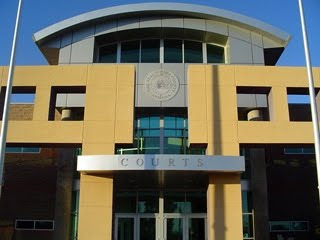 The day we've been waiting for for approximately 2 1/2 years, give or take a month or two, finally arrived!

We recently finalized the adoption of Boo and she is now legally our daughter! Of course, we've considered her a part of our family pretty much from day one but now it's legal. There is no longer any threat of her being taken away from us.

As you all know, this has proven to be a much more difficult journey towards adoption than we expected. We entered into Foster Care training rather naively. We were quite optimistic in the outcome of adoption through the Foster Care system, believing that we'd have a child adopted within a year.

Baby Bug was our first placement and we lost our hearts to her quickly. She was reunited with her parents 8 1/2 months later and, although we supported that decision because we knew how hard they worked to get her back, we grieved A LOT. I still miss her and I had to grieve all over again when her parents chose to end all contact with us a second time.

Our continued journey through the Foster Care system with Boo was very little like we expected. We were lied to by the initial social worker, who told us what she thought we wanted to hear, in order to get Boo placed in our home. It wasn't until I attended the next court hearing, a couple of months after her placement, that I realized how much the social worker had lied and kept information to us.

We tried desperately not to get our hopes up about adopting Boo, as we waited to see how things would pan out with her bio mom who was incarcerated. We waited, and waited, and waited for the judge to make a decision, either way.

We did our best to be "good" foster parents, attending all court hearings, filling out all necessary forms, speaking up inside and outside of the court and advocating for Boo's needs along the way, being careful to follow all guidelines put forth by the foster care agency we were licensed through.

After many months, we got the severance ruling that we had prayed for, due to the instability of Boo's bio mom and her criminal lifestyle. But then, against all odds, the Court of Appeals overturned that ruling on a technicality and threw the case back to the Juvenile Court system and told the new judge to "start over". That's when talks began in earnest of having Boo transferred out of state. It seemed that our state wanted to "wash their hands" of the situation, regardless of what that meant to Boo.

We had to hire our own lawyer to gain "party status" in the case and fight even harder for Boo's rights.

In the end, Boo's bio mom made the difficult decision to admit that she was incapable of offering Boo the stability she needed and deserved and voluntarily severe her parental rights so that we could adopt her. Everyone involved in the case felt that we would've gotten another severance ruling again, even had she not come to this conclusion on her own, but we didn't trust "the system".

The events leading up to Boo's adoption have been nightmarish. We lost a lot of sleep, our marriage was strained, our finances were strained with unexpected legal fees, our family struggled, we doubted ourselves. But, we hung in there, we fought for this precious little girl, and now she's forever an important part of our family!

Boo's Adoption Day was glorious! We had a private adoption ceremony, with the same judge that finalized Snuggle Bug's adoption and the same lawyer too! Many of our family members and very dear friends were there to witness this amazing event. There was much joy and celebration! And there was an unexpected bonus to all of this...Snuggle Bug was a part of it all and Boo's adoption finalization helped him to understand a bit more about his own that took place when he was only 3 months old.

Afterwards, we had a party in a nearby splash park for Boo. It's one of her favorite places to be and she had a grand time! She got an Adoption cake, many thoughtful gifts, lots of hugs and kisses, and many well-wishes.

It was an emotional day for me. It was perfect! There are moments when I still find it hard to believe that we actually made it through to the other side.

Shortly after Boo's finalization, we notified our foster care agency that we were closing our home. Ornozo and I thought long and hard about that decision. It wasn't an easy one to make. But we both feel that it's best to focus on the raising of the two beautiful children that we have been blessed with.

Maybe one day again we'll foster. I'm sure we'll find other ways to help children in need. It's a passion of mine.

Thank you for all that have followed this journey. Your support, encouragement, and prayers have meant the world to Oronzo and I!

Don't think that you've seen the last of me though. I may not blog as often as I used to, but I'll still pop in now and then to discuss issues related to being an adoptive parent. And I hope to hear from you as well!

I'm a bit uncomfortable posting our family picture on here, but if you've been following our journey and you'd like to see one of Boo's adoption day photos, leave me a comment with your email and I'll oblige!

Beautiful adoption video
Date Night Bliss
Family Rules and Values
In the swing of school
It's time for the kiddos to head back to school a...
Flying home for a nice, long visit!
Baby fix!
Easing back into blogging
A shocking phone call
1 year anniversary for Boo