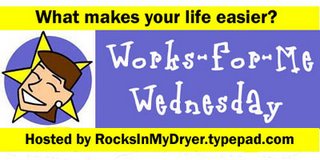 Snuggle Bug has, at times, been a restless sleeper, waking up and falling back to sleep (usually on his own) at least a couple of times per night.

We've always been against having a bottle in Snuggle Bug's cribs for the obvious reasons (risk of choking, rotting teeth, etc) but when he went through a two week period of getting up several times a night, crying, we tried everything to figure out what the issue was. Eventually I thought to myself, 'I keep a cup of water by my nightstand and wake up thirsty, maybe he's getting thirsty too!'

So we started putting Snuggle Bug to bed with a spill proof sippy cup filled with water. We'd hand it to him in his crib after his bath, bottle, book, and teeth brushing bedtime routine.

The first night there wasn't much out of it. The second night we noticed a bit gone, and each night it seemed as though more and more was gone. Amazingly enough, eventually the interrupted sleep nights disappeared! 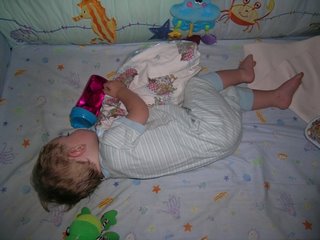 Just last night he drank the entire sippy cup at some point during the night (I don't know when because he didn't wake us up) and I'll have to refill it this evening before putting him to bed!

We've secretly watched him wake up, root around in his crib until he finds the sippy cup, gulp a few sips, and then snuggle back down with his blankie and fall back asleep with no fuss!

I'm sure thirst wasn't the only thing causing Snuggle Bug to wake up at night during that tough patch, but it's nice that allowing him to quench his thirst eliminates one possibility for sleepless nights.

If you have a little one, I'd encourage you to give this a try. It works for me!

If you'd like to share something that works for you, please leave me a comment. And be sure to link yourself over at Shannon's, the host of Works-For-Me Wednesday.

you know this actually works for us too, sometimes though Cam can't find hte cup, I think a night light will resolve that problem. but you are so right it really does work.

Glad you came by and its nice to meet you too! your photos are wonderful!

Awww, my little guy does this too. Of course he usually ends up stashing a cup of soy milk too, so we are always hunting for the rotten soy milk, yuck!!

Great tip! We've let our 7-year-old keep water on his nightstand for several years, to prevent those, "Mom, I'm thirsty" calls in the middle of the night. We found a neat thermos with a built in straw at Wal-Mart that is the perfect "cup" for those midnight sips.

Don't you just love it when you figure out their needs?! I hate not knowing what Devyn is wanting or needing and when we figure it out, I feel like doing a happy dance. Good job Mommy!

Very good idea. I don't know what Mam's did before the invention of the non-spill sippy cup! Definitly one of the best kiddie's inventions ever. You can tell a mam designed it.

Great idea - giving kids water couldn't be a healthier habit to get started young. Thanks for visiting my WFMW!

The only way my kids will drink water is if its mine. That is a great idea. I am going to give it a try on my little one.

That is an excellent idea! My little guy wakes up in the middle of the night sometimes, but he usually goes back to sleep. I'm gonna try this tip and see if thats what he's looking for too!

Great idea.....my kids are no longer little so I can't try this...dagnabit LOL

This is a great idea. I use a spill-proof sippy cup to keep water available for my little year-oldgrandson during the day when he's playing. He gets his regular bottles of milk and juice but I figure he gets thirsty during the day just like I do. I add a teaspoon of dry jello mix to give it a little flavor and he loves it!

This worked for us until our son started potty training. Then he had a couple of accidents so we stopped his drinking after eight o'clock...it worked great for a long time though!!

The pictures on your blog are beautiful! Thanks for stopping by today!

Great discovery! Thanks for stopping by my site today!

Next ... LOVE the idea. My son looks for his pacifier in the middle of the nights, so we have one on each side of the crib.

I'll have to remember the water as he gets older!

Your blog is beautiful! My daughter had a terrible time trying to go to sleep without a drink. I was a bad mommy and let her sleep with a bottle just a few times when she was weaning and ever.since.then.we've been trying to break the habit. She goes for a long time and then starts begging for it again. So why didn't I think of only letting her have water!? I've been worried sick over her teeth, but water would be great for her!

We did the same thing when my kids were in the sippy cup crib stage. Now if you have a tip for how to get your 4 year old to sleep with the light OFF, I'm all ears!!!!!!!

If only I'd read this a couple years ago -- oh, the sleepless nights due to just. another. drink. Of course now that Halfpint is out of diapers he's not allowed even a SIP after 8pm. Saves me from midnight sheet changing!

That worked for us too. Since his crib was in our room, you would here him root around, find the cup-shake it-to see if there was more, drink and go to sleep. It was so cute.

Great solution! and it sure does seem like it did the trick! What a cute picture of him sleeping with the cup right next to him too :)

Your little one is SO precious!!! Thanks for the tip!!

Makes sense...works for us adults so why not kids? Great idea.

Look how peaceful he looks all snuggled in his bed...and what a good idea!!!! Congrats OW~!

So, so, so sweet. My lil' bug is going through EXACTLY the same thing right now, but sadly, the water sippy cup is not working it's magic... she also has a bit of a cold. Do you think that could be getting her up at night so much?
I'm glad it's working for you, and it's very good advice.

I can't remember whose blog is whose, so I was thrilled to visit "that Irish blog" again when I followed your comment back. I must bookmark it so i can come gaze at your pics again!

I don't have kids but I can vouch for the midnight thirst as my husband brings a drink to bed every night. It took me a while to get used to but it makes sense.

awww what a sweet picture!!!!